The “Central Queensland Coal Project” consists of an open cut operation and rail connection to the Queensland Rail North Coast Line. The Project is a joint venture partnership between CQCPL (99%) and Fairway Coal Pty Ltd (1%).

The Project intends to mine 2.0 Mtpa of run-of-mine coal, which when processed will produce 1.5 Mtpa of semi soft coking coal. The project will initially commence operations with a 1.0 Mtpa open cut mine, eventually ramping up to 2.0 Mtpa and in later years up to 10.0 Mtpa.

Key elements of the Central Queensland Coal Project are: 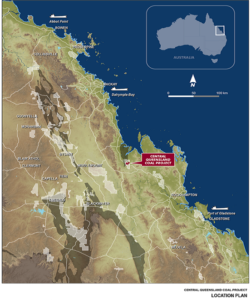